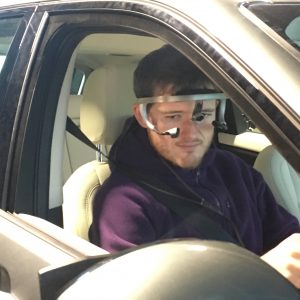 After completing his undergraduate degree, Craig worked with Learn Direct, in collaboration with Portsmouth City Council, as part of their adult education scheme “Pride in Pompey”. The scheme sought to provide English, Maths and ICT qualifications to adults with no previous qualifications. It was during this time that Craig became interested in the transformative effect that technology can have on peoples day to day lives, sparking an interesting which he took forward into his M.Sc, and PhD.

Since joining the Human Factors team in October 2015, Craig has worked on both aviation and automotive projects. Craig’s current research focus is developing in-vehicle interfaces to encourage drivers to behave in a more environmentally conscious and fuel-efficient manner, as part of the G-Active project. Craig is looking forward to implementing the developed interventions into the simulator to examine the impact of the developed interventions on overall fuel efficiency. After seeing the impact technology can have in transforming individuals lives, Craig is hopeful that technology can be used to transform our relationship with our environment.